Back in the 2000s, men’s fashion took a fairly drastic shift — favoring slim, form-fitting garments rather than the loose, baggy ones popular in the 1990s. And while this meant that, at least as far as fashion is concerned, much of the populous began to look a little more like GQ cover models and a little less like Kriss Kross; it also had some interesting effects on the men’s accessory world. No longer could bulky traditional wallets be stashed unnoticed in pockets. To cope with this sea change, a group of designers and creatives got together in the town of Bells Beach, Australia, and set to work creating everyday carry solutions to suit the sleeker trending fashions. In 2010, they launched under the Bellroy moniker — a portmanteau of Bells Beach and Fitzroy, two towns where the company had offices.

Since the company’s inception, Bellroy has become one of the most well-respected EDC gear brands around the world. And while they started by crafting pocketable accessories, they’ve since expanded into the world of bags, as well — utilizing the same design cues and mindset that made their earliest offerings such huge hits. One of their newest offerings in that regard is their aptly and simply named Bellroy Sling, which we’ve had the fortune of getting our hands on for an in-depth look. So the question we’re here to answer is this: does Bellroy’s take on a sling bag stand up to the same scrutiny we’ve come to expect? 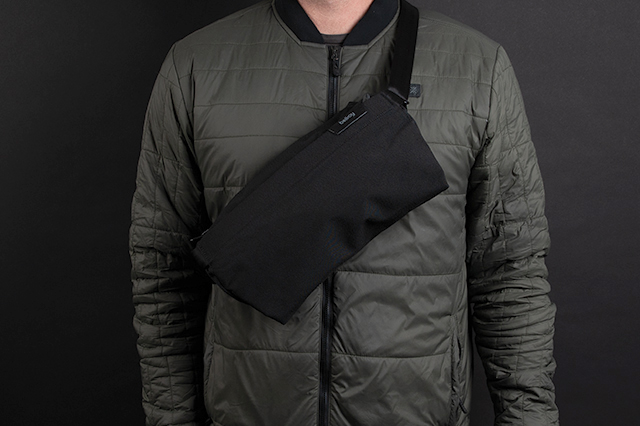 With its clean design lines, minimalist silhouette and exterior features, and a somewhat-subtle leather branded label, this sling bag slots in perfectly amongst Bellroy’s suite of frankly beautiful offerings. Even at a distance, it’s clear this is a product of the respected Australian firm. The proportions look good, the stitching is clean and there’s no part of the bag that looks ready to fray, and the fabrics have a pleasing visual texture to them that helps give a sense of depth to the sling bag. That being said, we were a bit surprised by its size, even knowing it has a fairly considerable 7L capacity. It’s one thing to know a bag is capacious in theory and another in practice. It’s not that the Bellroy Sling is enormous, per se; we’re just used to sling bags (AKA fanny packs) being on the more compact side of the spectrum. Once over the slight size shock, however, we were pleased with all else we discovered. 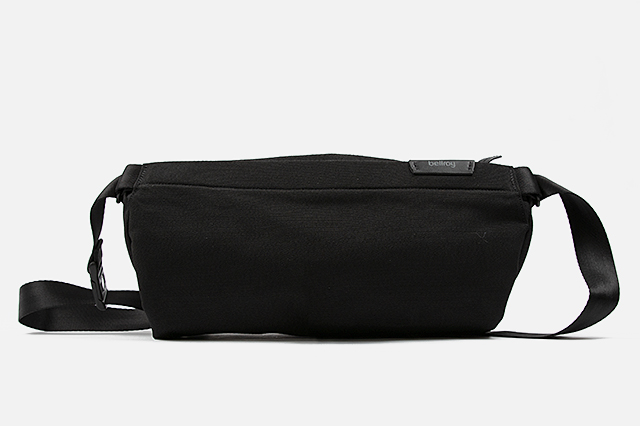 As previously mentioned and as we’ve come to expect from the folks at Bellroy, the design of their sling bag is impeccable from any angle. There’s not a tremendous amount going on with the exterior — no extra pouches, grids, or extraneous details — but the few design details that are visible are crafted impeccably. That being said, those with a penchant for the tactical or technical may find the outside of the Bellroy Sling a bit wanting. However, if you’re the type with a flair for the simple and straightforward, you’ll likely appreciate every bit of what this sling bag brings to the table.

The black colorway that we got our hands on is made from a water-resistant Venture cloth — which, like the brand’s leathers, is sustainably sourced and produced — that looks like very finely-woven nylon but feels much thicker and sturdier. It’s so thick and tough, in fact, that there isn’t much give in the fabric — meaning that it doesn’t quite conform to your body even when worn at the hip and (at least when empty or filled sparsely) it will actually fold in the center (presumably the weakest structural point) rather than bowing. Still, the way the bag is built and the format of the strap attachment points leads us to believe the brand envisioned this worn at either the front or back of the user’s body and, thusly, this is, functionally-speaking, a non-issue. 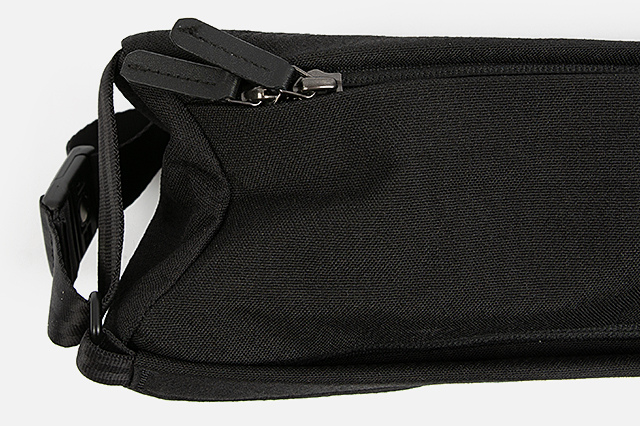 One of our absolute favorite parts of this bag is actually not immediately discernible. You see, the main strap is attached to the back of the bag, fed through a secondary rectangular metal ring at the front of the bag, and then doubled-back on itself when worn. This simple, elegant design element allows the bag to actually collapse much smaller than the 7L total capacity when not filled to the brim and makes expanding it to its full size as simple as opening up the bag. That means you can, at least in part, alter the size of the bag to suit the amount of gear you’re carrying on any given day. And you don’t even really have to think about it; the bag almost manages this transformation on its own.

Finally, the back of the bag is equipped with a three-panel pad intended to make wearing the bag, especially with a full load, more comfortable. This section might be our biggest gripe with the exterior, as the padding of the back is so thin and the Venture fabric is so dense that you may not even recognize that the padding is there at all. Of course, even at 7L, the Bellroy Sling doesn’t really approach the capacity at which padding is entirely necessary, which might explain this feature feeling more like an afterthought than an intended part of its design. 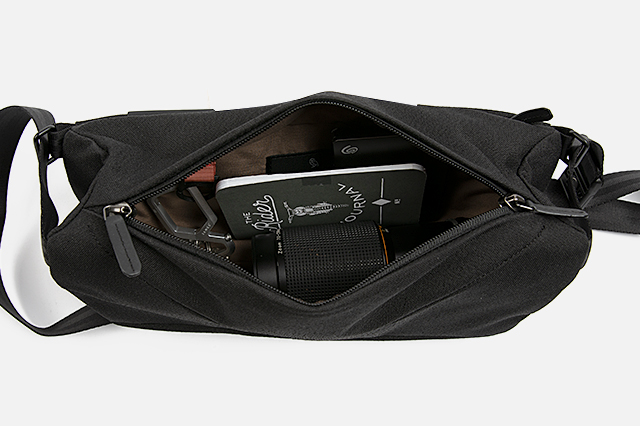 Going along with Bellroy’s typically minimalist approach, this sling bag has just two compartments — a relatively small front zippered pocket and a second, larger main compartment accessed by a two-way zipper. The first is actually recessed behind a thick external upward-oriented flap (which has the leather Bellroy logo label in the upper front quarter), which ensures its accessible by the wearer but is far more difficult to enter for anyone else — which is helpful for those worried about pickpockets.

The inside of the front pocket is actually more spacious than we might’ve initially expected and offers more than enough room to stash an entire EDC loadout — e.g. a modern smartphone (we used an iPhone XR), front pocket wallet, pen, knife, lip balm, etc. The lining of this pouch is also soft enough that we would feel comfortable stashing a grab-and-go pair of sunglasses (however we’d be given pause when it comes to storing a more expensive pair). Finally, the opening is wide enough that we didn’t struggle with getting our hands inside, even in the bottom corners, which makes this an ideal quick-access pocket. 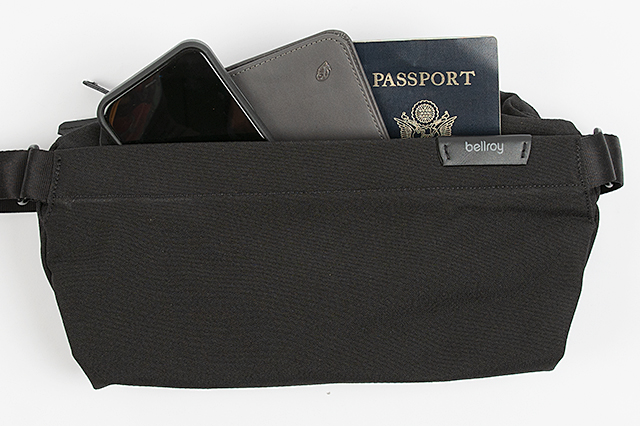 At first ingress, the dual-zip main compartment doesn’t look much larger than the front pocket. However, if you reach inside the admittedly tight opening and push the sides outward, the illusion is shattered and it’s clear the bulk of the bag’s 7L capacity is here in the main compartment. Thankfully, while this main entryway isn’t exactly friendly to peering inside, teaching in with one’s hands is still a simple prospect. Furthermore, the inside of the pocket boasts two other noteworthy features. First, there’s an integrated Bellroy-designed keyring attachment point, so your keys and keychain accessories are more accessible than they might otherwise be. Secondly, there’s a secondary zippered pocket with an extremely soft liner — which has plenty of room for sunglasses and even has enough space for an iPhone XR while still being able to zip up. 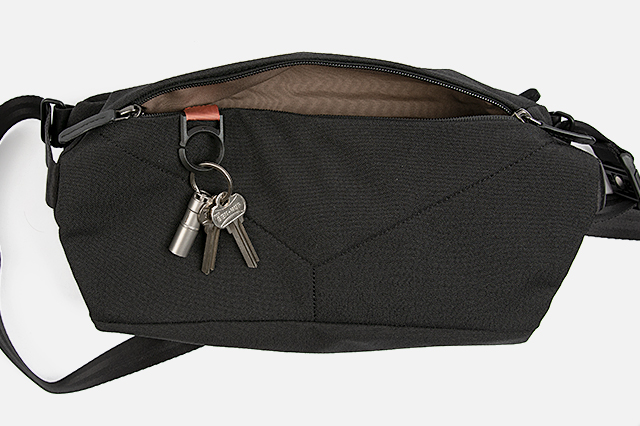 Unless you count the pull tabs on the zippers (which we don’t), there’s only one strap of which to speak on the Bellroy Sling. And it really only needs the one. Furthermore, its managed so brilliantly, we’ve found ourselves wishing more brands put this kind of care and attention into the design and execution of their straps, as it truly helps set this sling bag apart.

The strap is built from soft and sturdy nylon — the same commonly used for car seatbelts — that’s pleasing to the touch but also feels substantial and durable. It’s also equipped with a single metal adjustment point that’s easily altered whether you’re in the safety of your own home or wearing it out in the world. This system was also designed to keep any of the strap’s excess length from dangling yet it still adjusts enough to suit any kind of wear — be that long or short. As previously mentioned, the strap is also integrated into the bags ingenious collapsibility scheme, which doesn’t impair its functionality whatsoever and is certainly one of the biggest high points. 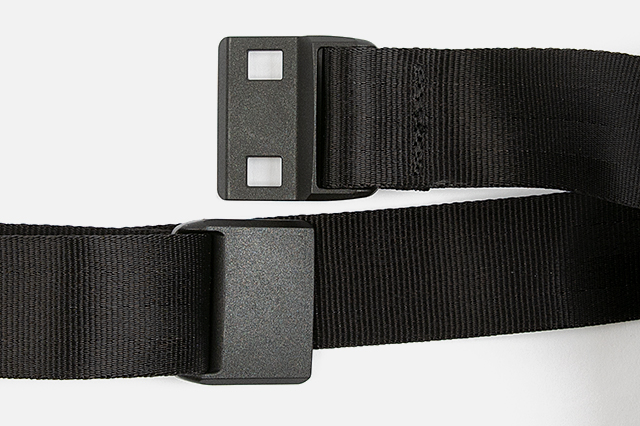 Another exceptional high point with the Bellroy Sling is its solitary strap buckle. Rather than opting for a simple clip-in plastic buckle, the brand opted for an intelligently-designed magnetic clasp that, even with hard tugs, is secure and strong. However, with a simple lift and slide, it comes apart quickly and elegantly, without fuss or frustration whatsoever. And clipping it back together is an equally simple prospect, marked by a satisfying click.

Lastly, this sling bag boasts a duo of zippers on its two compartments — a single zip on the front pocket and a dual, two-zip system on the main pouch. Equipped with stitched leather pull tabs, these zippers operate smoothly and gave us no trouble in either direction. There’s no stickiness, no snagging — just smooth opening and closing. It’s our opinion that, when done right, zippers are one of those features that tend to go unnoticed. However, it’s hard not to notice these well-executed ones. 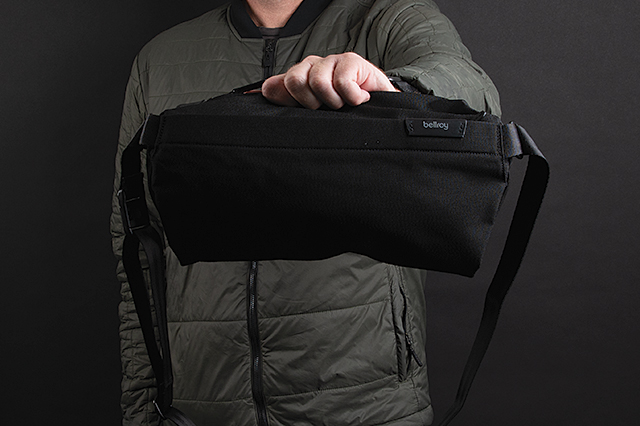 Brilliantly conforming to the design language that has helped set Bellroy apart since their inception in 2010, the brand’s Sling is beautiful to behold without seeming overly delicate or dainty. The minimalist, water-resistant exterior lends itself well to city living, but the Venture fabric, durable seatbelt-style strap, sturdy magnetic buckle, etc, all make it sturdy enough that it could survive extensive time in the great outdoors. The internal storage layout is simple and straightforward and, while we wish there were more organizational options, we didn’t struggle or find frustration with storing our EDC gear (and some extras) within. 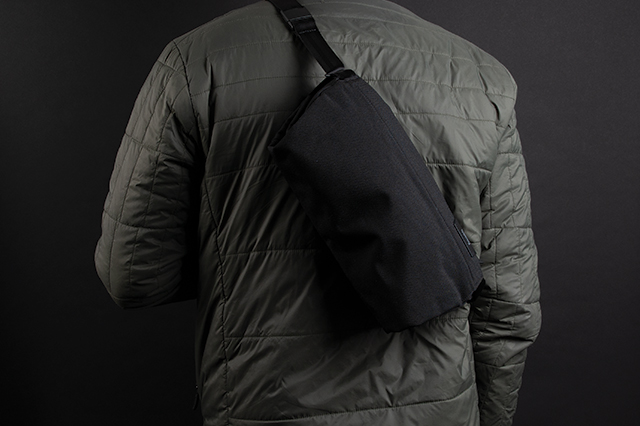 Our biggest gripe with the bag may be found in its possibly-pointless back padding and its stiffness (though we wouldn’t trade the latter for, but that remains more of an annoyance than a true pain point. Finally, the strongest bit the Bellroy Sling brings to the table might be intuitive expandability, which works so seamlessly we hardly had to think about it at all. All told, this sling bag has far more bright spots than drawbacks. And, with the exception of the tactical outdoor and technical streetwear crowds, we’re certain everyday carry fanatics will be pleased with it both inside and out.