Traditional everyday carry gear — leather bifold wallets, especially — is almost too easy to come by. In fact, even exceedingly well-made, craftsmanship-focused options are widely available at just about any price point. So, for a brand to really stand out amongst the crowd, they have to bring something a bit different to the table. And Dango — founded in November of 2015 through a wildly successful Kickstarter campaign — has managed to cement themselves in the EDC world through a series of unique, functional, durable, impressive pieces of carry.

One of the company’s most instantly-recognizable and impactful offerings also happens to be the one we have gotten our hands on for this in-depth review. We’re talking, of course, about the T01 Tactical Wallet — a USA-made, industrially-styled, ultra-tough, utilitarian front pocket wallet unlike just about everything else on the market. Aggressive in its styling, yet pared-down in its form, this piece of everyday carry gear is a statement-maker — but whether that’s a statement you’re looking to make remains to be seen. 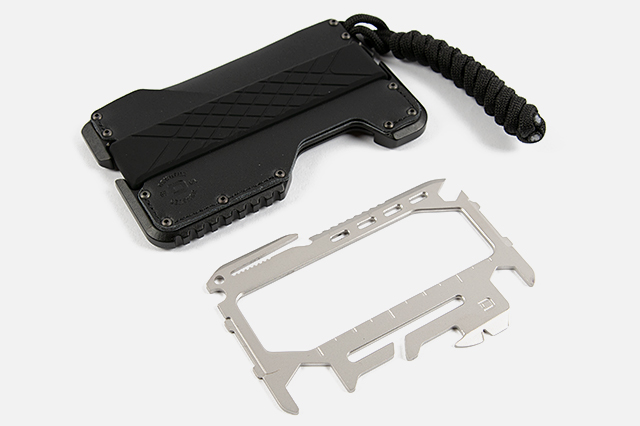 The silhouette of the T01 Tactical Wallet is smaller than we initially expected — only slightly larger than the credit cards one is to store inside of them — however, the frame is quite thick. Still, it’s a good deal smaller altogether than more traditional bifold and trifold wallets, making it much more ideal for front-pocket storage. The T01 also looks quite intimidating, with its single jimped edge, angular bevels, screws atop its stitching, cross-hatched silicone cash strap, and just a small peek of the included, removable multi-tool. If subtlety is amongst your top concerns, a first glance at this aggressive design may send you headed straight for the hills. If you have a flair for the tactical — it is in the name, after all — you’re in the right place. 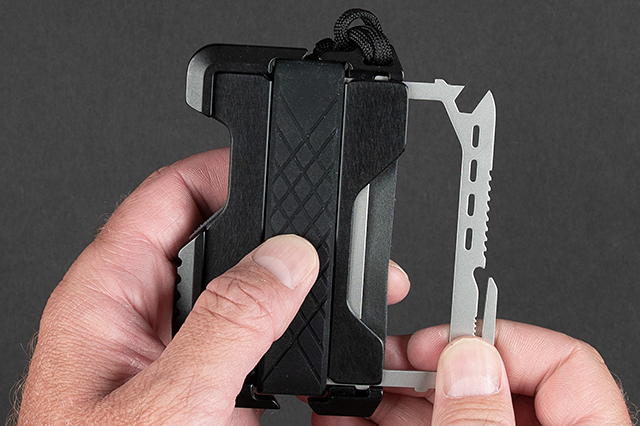 Unlike many of its more traditional predecessors and competition, the Dango T01 is actually comprised of four different, individual construction materials — so long as you include the removable multi-tool. That starts with its frame: a CNC-machined aerospace-grade 6061 aluminum number that’s equal parts lightweight and tough-as-nails. That same material is used for its RFID-blocking backplate. While it results in a silhouette that’s quite rigid, it’s also more durable than most other options around.

On the frontside of the wallet, there’s also a top-grain leather pouch that’s sewn and bolted directly onto the chassis — adding just a touch of traditionalism to this otherwise thoroughly modern cash and card carrier. Wrapped around the frame, plate, and leather pocket, the wallet also has a silicone cash strap that’s both thick and durable and has good elasticity.

Finally, at the heart of the wallet, you’ll find the included MT02 Multi-Tool — which is made from solid steel, yet doesn’t add too much to the overall weight thanks to its minimalist, skeletonized design. All told, it’s quite difficult to find any fault in the craftsmanship. Sure, the styling might not be to your tastes, but there’s no denying that this piece of pocketable EDC gear is altogether well-built and -designed — at least as far as aesthetics and appearances go. 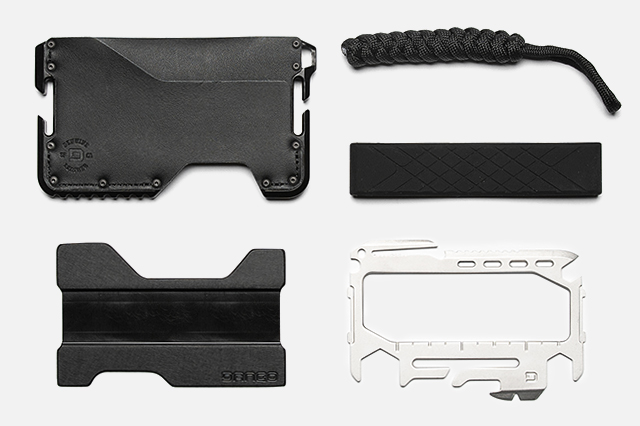 Here is where things get a bit complicated — not so much regarding usage, but rather in regards to overall functionality; there’s just so much this wallet can do that it’s hard to pare it all down into a manageable explanation. As such, it’s perhaps best to start at its baseline functionality — the cash- and card-carrying capabilities. Regarding cards, there are two available slots (or sections) in which to stash your ID and/or credit cards — one at the front side in the leather pouch (probably best for your most-used cards) and another at the back between the multi-tool and the rear aluminum plate (best for infrequently-used cards). According to the brand, you can fit up to 12 cards, so long as you remove the multi-tool, but we found that our small handful (six, to be exact), were easily managed and accessed. The rear plate section offers a touch of resistance when putting the cards in, but the cutout at the bottom of the wallet makes extracting them far simpler.

Regarding cash, the silicone strap that surrounds the wallet functions quite well on either side, though we assume most people will prefer to keep their cash at the back so as to avoid hindering access to the front card slot. The elasticity of the band is tight, but not too tight and it’s also removable and replaceable should it stretch out too much for your liking (you can even buy replacement bands from the brand directly). It’s important to note that this strap also holds the rear plate in place, so you cannot simply remove it if you don’t need a cash strap. All told, managing your cards and cash is a fairly simple affair, if requiring just a touch of practice to smooth out the process.

The final element — the MT02 Multi-Tool — is the trickiest, but also the most well-considered part of this whole wallet system. Initially, we were a bit frustrated with trying to remove the stainless steel multi-tool, as it actually “locks” into place within the aluminum frame. However, with a bit of fiddling, we discovered that this actually allows for 3-position usage. The first position is locked away inside the wallet for storage but also functions as an integrated bottle opener (a handy and helpful addition). Tilt the backplate outward and pull the multi-tool just a few centimeters out and it locks into position two — giving the user access to the rope tensioner and partially-serrated blade edge and allowing the rest of the wallet to be used as a handle. Perform the same action and pull the multi-tool out further and you’ll find a slot large enough to put your fingers through — allowing you to use a hex wrench slot and transforming the wallet into an ad-hoc knuckle-duster for self-defense purposes.

Finally, if you pull the entire multi-tool out, you’ll gain access to the rest of its 14+ functions. Removing the tool also opens up the wallet for more storage — meaning you can fit more cards inside — and it makes the whole rig TSA-compliant, so you can take it with you on flights wherever you may be traveling. Though a bit tricky and frustrating at first — especially if you find yourself trying to put the multi-tool away backward — the whole system is remarkably useful and easy to understand once you’ve grasped the basics.

It’s also worth noting that there is one final, optional inclusion: an included paracord lanyard. Each T01 Tactical comes with a short length of woven 550 paracord that can be attached to the lanyard loop on the side of the frame, which offers multi-faceted function — including offering a quick grab for easier pocket removal and it can be unwoven and used in a survival situation. Of course, this addition is also entirely optional and can be removed at-will should you not want to utilize it. Still, the option is a nice one to have. 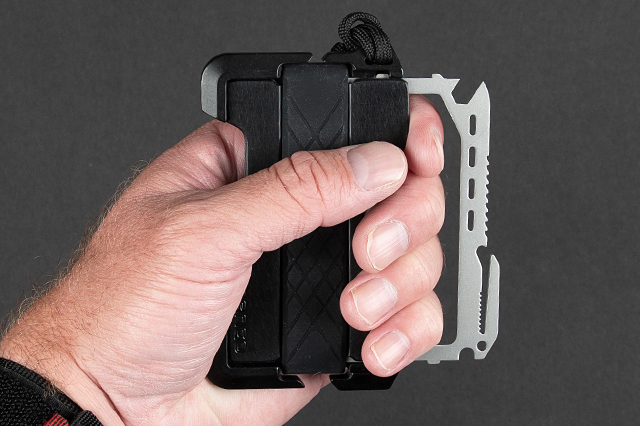 There are several types of people that might feel drawn to this particular cash and card carrier. Its slimmed-down format makes it a solid choice for those who appreciate minimalism in their EDC — or perhaps those who like to maximize capabilities while minimizing size and weight. It’s also suited quite well to the DIY crowd — a symptom of the included 14+ function removable multi-tool. Those who like to make quick fixes, especially on-the-fly, will find that the T01 Tactical is remarkably useful in that regard. Finally, there’s the juxtaposition between up-to-date EDC gear and the tactical styling. That is to say, those who appreciate modern sensibilities but also like their gear to have a bit of grit and chutzpah will undoubtedly be drawn to this “tiny but mighty” front pocket wallet. 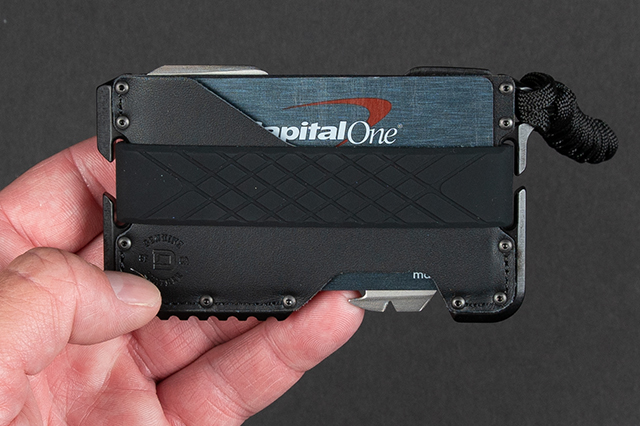 Impressively compact, remarkably tough, and almost absurdly useful, the Dango T01 Tactical Wallet is pretty impressive all-around. And while it definitely has a bit of a learning curve — especially in regards to figuring out the functionality surrounding the included 14+ function removable multi-tool — it’s not so daunting that interested parties might shy away. Of course, along with its impressive array of features, there are also some pitfalls. The aggressive design, for one, is anything but subtle and there are sharp edges that, when paired with the wallet’s rigidity, could potentially wreak havoc on pocket fabric. If you’ve got the kind of wardrobe that can handle a bit of punishment and a taste for tactical styling, however, this maximally-useful minimalist front pocket wallet is a surefire hit.