If you take the concept at a base level, everyday carry doesn’t sound all that dire. In fact, the very verbiage of the name makes it sound commonplace. But the truth of the matter is this: everyday carry encapsulates the gear that you’ve chosen to rely on to get you through your life day-in and day-out. And while a given loadout is going to vary in style, functionality, scope, and more, it’s important to remember that, at its basest purpose, your EDC is meant to help you in any way necessary.

For most people, an everyday carry backpack is little more than a vessel in which to haul around your daily kit — be that a grouping of gear that’s office-friendly, tech-focused, or something else entirely. However, if you really understand the point and purpose of your bag — that this device is equal parts a storage device, protective armor, and an organizational system — you might give what you carry a good deal more thought. That’s, in part, why we were so excited to get up-close-and-personal with GORUCK’s GR1, as this bag has been touted for years as one of the toughest, most impressive, best EDC backpacks available now or ever. And while you’ll need to wait and see for yourself if you agree, allow us to give you a bit of a spoiler: we’re not sure we disagree with the hype at all. 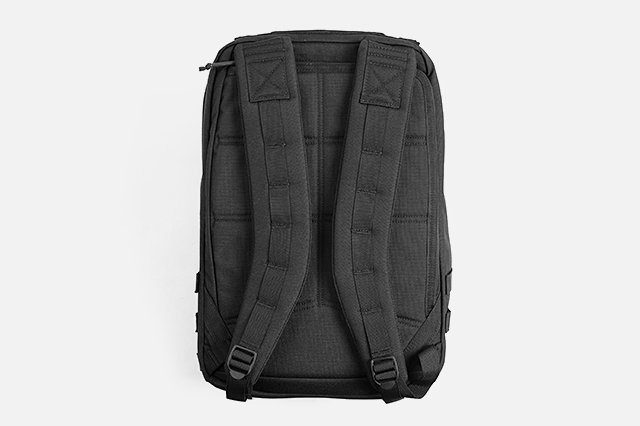 With its single colorway and relatively minimalist exterior, GORUCK’s GR1 is a fairly unassuming backpack — at least at first glance. It is quite simple in its format, doesn’t have an abundance of external details or hardware, and just sort of looks like a backpack — not entirely dissimilar to the bookbags so many of us carried in our school-going days. If there are any immediately noteworthy traits to be discerned at the offset, they’d be the bag’s distinct MOLLE-friendly PALS webbing at the bottom quarter and sides, as well as its relative heft — 2.9 lbs when empty. There is far more to this bag than a first impression gives away — which we will get to later — but the lack of boastfulness is very apparent and, in our opinion, one of the GR1’s many strengths. 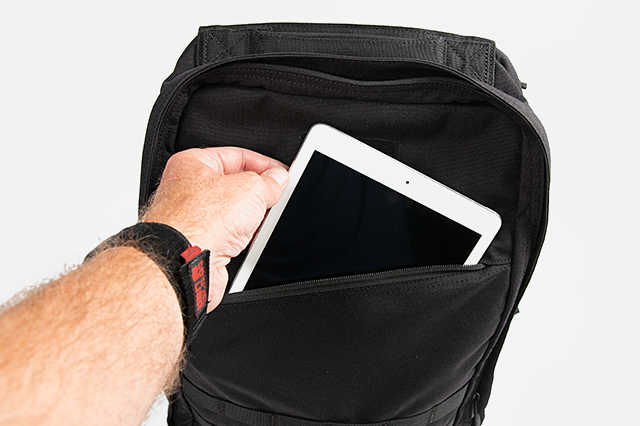 There’s a reason we’re harping on the GORUCK GR1’s unassuming appearance, and it starts with its materials and craftsmanship. Yes, it looks like what we’ve come to expect from backpacks — albeit with a couple of unique design touches, i.e. the diagonally-oriented front pocket, the velcro patch square, and the PALS modular webbing on the bottom 1/4 — but it’s what you can’t see (or perhaps don’t notice) that makes this pack so special.

For starters, the fact that it looks like a backpack is actually indicative of another quality: it’s well constructed. If this bag had sloppy stitching or significant design flaws, you’d notice almost immediately. So the fact that you aren’t seeing any stray threads or awkward angles is a very, very good thing. That’s not simply coincidental, either, as a closer look reveals just how clean the construction actually is. The detailing is practically immaculate, the reinforcements are strong, the hardware is substantial, and — while the padding on the back and straps is a bit stiff — it’s still comfortable to wear, even under a heavy load.

It should be noted that this backpack is also built nearly head-to-toe from 1000D Cordura ballistic nylon. Not only does that mean that it’s naturally weatherproof (though we’d suggest heading inside in a substantial downpour), but it’s also incredibly tough — boasting near-unrivaled abrasion and puncture resistance, especially compared to its availability and price. The bag is also quite rigid, but — again — there’s a reason for this. You see, the bag has its own built-in bombproof laptop compartment. Unfortunately, we did not have the means to test exactly how far the literal bombproofing goes in this regard, but there are plenty of testimonials and trials you can look into, some from genuine top-level military personnel, that can attest to its overall durability even in the face of live ordinance. 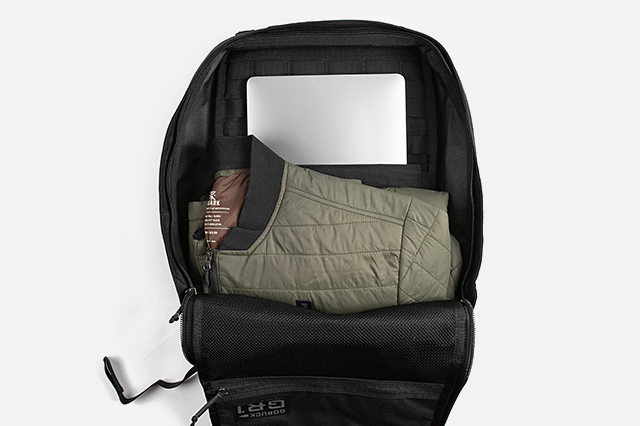 Due to the nature of the GORUCK GR1, its materials and craftsmanship happen to tie directly into its functionality and form. And, while the internally-accessible bombproof laptop compartment — which can safely store a folding computer up to 16″ in diameter — is definitely a highlight of its performance (as is its ultra-tough, weatherproof Cordura exterior), it’s hardly the only feature that shines like a bright beacon of EDC goodness. Alongside its most defining feature, this bag also offers a bit of modularity, a generous internal storage slot, and a single externally-accessed zippered pocket.

To start with the latter, the external zippered pocket isn’t particularly fancy, but it is purposeful. The zipper that guards entry is sturdy and protected by a small flap of Cordura nylon, making it more weather-resistant than it would otherwise be without impacting its performance. It’s also quite deep and roomy, making it a solid loose stash for smaller items, and it can be accessed easily even by those with larger hands.

In contrast to the simple front pouch, the large clamshell-opening main compartment — which makes up for the bulk of its 21L or 26L capacity (depending on your purchase) — offers much more by way of storage and organizational options. That includes (obviously) the laptop compartment, but there’s a lot more to it than that. For starters, on the front of the compartment, the bag has two zippered pockets — a smaller one at the top built from Cordura nylon (good for a small complement of EDC gear) and a second larger mesh pocket below it (roughly the size of a large tablet or an 8.5″ x 11″ notepad.

At the back of the bag, in front of the laptop compartment, there’s a secondary pocket perfect for a tablet (like Apple’s iPad Pro) and, above that, a second set of PALS webbing. Paired with the PALS webbing on the front and sides, this gives users a whopping 48 different modular MOLLE attachment points, which makes this bag expandable, easier to keep organized to your particular preferences, and adds just a touch of tactical flair. There are even another 12 webbing loops on the padded shoulder straps, but they’re a good deal tighter and, therefore, less useful, as it’s a bit of a struggle to attach anything to them. Still, the inclusion of all the PALS webbing is noted and — to those who understand its value — make this bag all the more desirable. 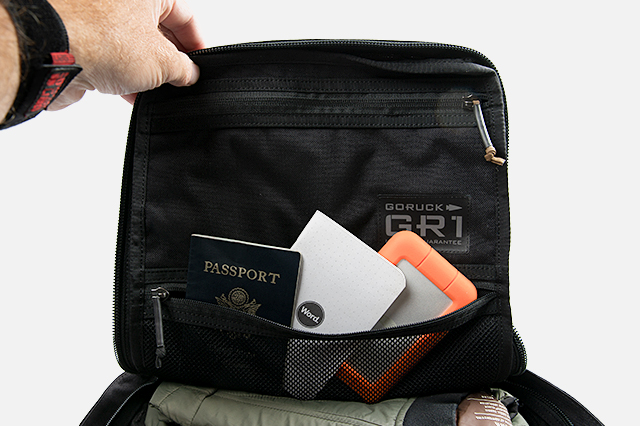 In the case of the GR1, trying to determine exactly who would benefit from such a bag is a fairly expansive task, as this bag does so many things well. However, there are some fairly obvious barriers to entry. For starters, the introductory price is quite high. Yes, you get a good deal for what you pay — definitely more than your money’s worth — but the investment is no less a steep one. If you can afford it, though, you might find that this is the last backpack you’ll ever buy — a fact furthered by the brand’s included lifetime warranty. Mate its high price to its relative heft and size and you may discover that this bag is probably best suited to those who are quite serious about the how, where, and why of hauling their everyday carry. If you are unwavering in your commitment to finding and procuring the absolute toughest, most useful, most well-designed EDC gear around, the GORUCK GR1 should definitely be on your shortlist — at least as far as backpacks are concerned. 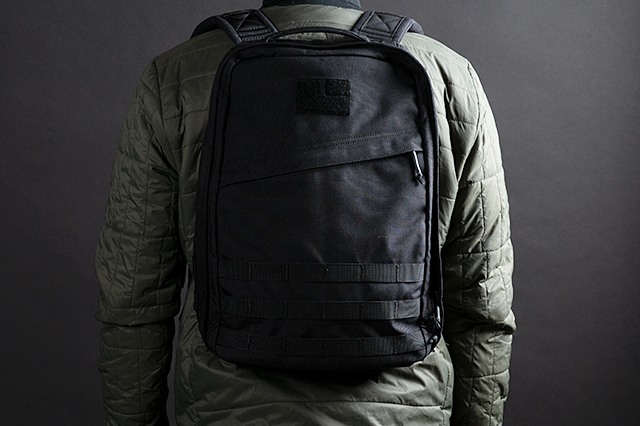 With its daunting price, relative heft, and large silhouette, the GORUCK GR1 is not without its downsides — which, alone, might frighten off the uninitiated. However, if you value nigh-indestructibility, the potential for multiple lifetimes of usefulness, and what some might call the perfect blend between tactical functionality and EDC-friendly styling, then you are sure to be pleased by this altogether impressive hauler. Sticker shock is a risk, to be sure, and it’s always going to be important to remember that the bag has a dry weight of 2.9lbs — but it will pay for its downsides tenfold through its durability, modularity, reliability, and so much more. It would be asinine to suggest that there is any such thing as the “perfect” EDC backpack, but we wouldn’t necessarily argue with anyone if they said this was it.