There was a time, seemingly very long ago, when all things everyday carry were analog. But that world, in large part, is dead and gone. Now, technology has invaded nearly every part of our lives. Not only that, but we rely on it more than ever to get us through the day. In fact, there are some folks whose careers wouldn’t exist without access to a computer. As such, gear has had to evolve to suit — even when that gear doesn’t qualify as “technology” itself.

In this case, that applies to one of mankind’s oldest tools: bags — more specifically, backpacks. For those who haul a complement of high-tech devices to and from the office and/or workspace on a daily basis — including a folding computer, tablet, power cables, and accessories (like a mouse, stylus, external hard drive, etc.) — a backpack with the proper amount of storage and security is an absolute necessity. And while there are numerous options regarding the best EDC backpacks that can carry all those things decently, the Incase ICON was made specifically with that purpose in mind. We took a deep dive into the ICON tech-focused backpack to find out just how well it performs in that regard within the following hands-on review. 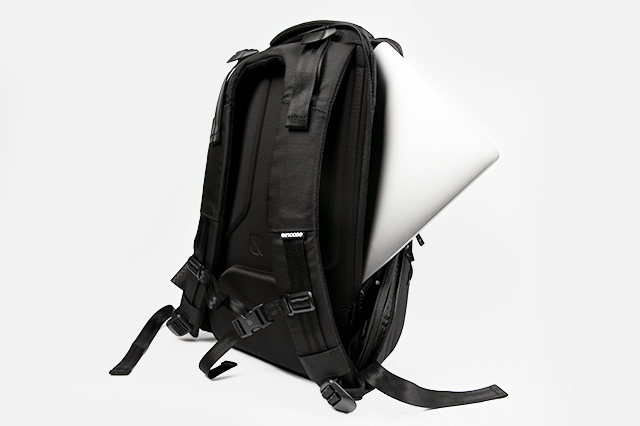 There are two things we first noticed upon handling the Incase ICON for the first time. First, its minimalist styling is clean and pleasing — there isn’t a mess of seemingly extraneous detailing and the whole silhouette seems well-considered and well-thought-out. Second, the backpack has a markedly rigid structure, especially when compared to similarly-outfitted everyday carry bags. In fact, this backpack looks more like travel-focused luggage than a traditional backpack. There is a very specific reason for this — namely its tech-friendly protective padding — but there is a stiffness to the bag that, for some, may be a turn-off. In spite of its rigidity and padding, however, the bag is still quite lightweight, clocking in at roughly 2.5lbs empty — which isn’t the lightest bag by a long shot, but it also isn’t as heavy as it looks. 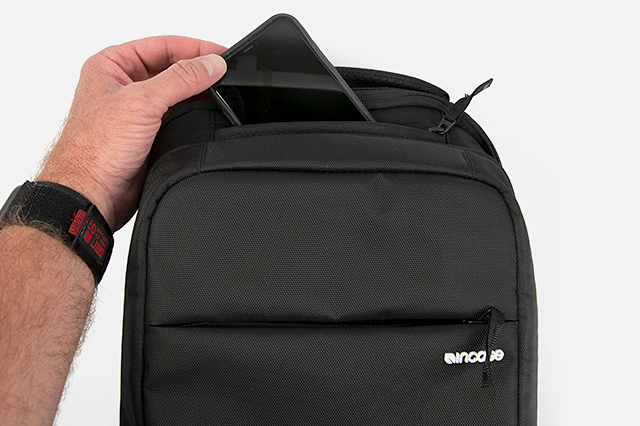 While the ICON’s most defining characteristic is probably its rigid, minimalist structure, it has plenty more going for it outside of its signature silhouette. For starters, the bag is built from 840D nylon. This is noteworthy for a couple of reasons. For starters, 840D nylon is still durable enough for everyday carry usage and offers up puncture and abrasion resistance. It’s also naturally weatherproof just like its higher-denier ballistic brethren. However, because Incase chose not to utilize trumped-up 1000D or 1080D ballistic nylon, they can offer many of the same — or at least similar — properties at a much lower cost. Yes, technically, 840D nylon isn’t going to be as tough as 1080D Cordura. However, for EDC usage, you’re probably not going to notice a difference.

To pair with the exterior fabric, Incase has equipped the bag with a suite of nylon straps — similar to car seatbelts — and heavy-duty plastic hardware — which is lightweight-yet-tough and suits the purposes of this backpack rather swimmingly. Furthermore, the shoulder straps (which boast a stabilizing sternum strap) have a soft mesh-covered foam and the back panel is similarly-equipped with foam padding. It is worth noting, however, that the padding on the back panel and that of the shoulder straps is different. While Incase is tight-lipped as to what the back panel padding is made from, we did discover that it is denser than the shoulder straps, but is also prone to denting and creasing. In fact, we accidentally dented the foam padding toward the bottom of the bag and now those dents appear to be permanent. The back panel still functions as well as it would, but the dents and creases are somewhat unsightly.

Beyond that, the bag is very well constructed. The stitching is quite good and the seam work is subtle and mostly hidden from the eye. With the exception of the aforementioned back panel padding issue, it’s difficult for us to find fault in the quality and craftsmanship of this EDC backpack. That one frustrating fault, however, may serve as a deterrent to some and should definitely be kept in mind. 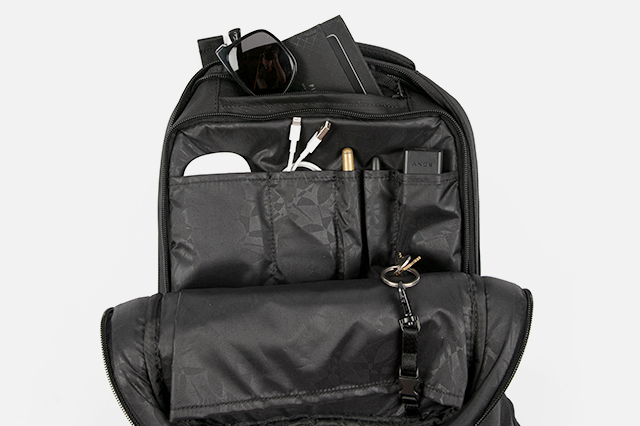 The Incase ICON’s sleek and pared-down exterior does nothing to betray its extensive innards. With a capacity of just 17L, it might not sound like much, but it has the organization where you need it — especially for the tech-minded folks out there. Admittedly, the limited capacity may be an issue, especially because the bag seems like it should be larger. But what it does with that capacity is pretty spectacular. The storage in the ICON is spread out across eight externally-accessible zippered pockets — including two that are large and deep and boast their own built-in internal organizational systems.

Apart from the two large compartments, the bag has two side-mounted “wings” that each have their own zippered compartment (including one with a headphone pass-through so you can listen to music on your phone, iPod, or another music player without needing to spring for wireless headphones). There’s also a deep-but-narrow front pocket with two wallet-sized pouches within. And there’s a small, top-accessed, microfiber-lined sunglasses pocket that could double as a quick-access mobile device pouch. Finally, accessed via either side of the back panel, there are two more pockets — one with a wider opening and microfiber liner for your laptop (up to a 16″ MacBook Pro) and another with a nylon liner that’s perhaps better suited to documents or any other thin items you want to keep from prying eyes that don’t need the protection of microfiber.

Now, back to the two larger compartments. The first (closer to the back panel) is the bag’s true main compartment and boasts the most space of all eight zippered pockets. It also has a trio of loose pouches — one that’s deep and large enough for a big tablet, and two others opposite one another that are roughly half the size of the larger one. There’s also a small zippered compartment toward the top for small items you may want to keep more secure (like power cables or computer accessories). The second large compartment has an even more comprehensive organizational system, however, marked by a removable keychain tether, a loose medium-sized pouch, and a built-in organizer with two wallet-sized velcro pockets and five other smaller pouches that vary in size (some as small as a pen sleeve and others that are a bit bigger). If you organize compartmentally, the suite of pockets, pouches, and compartments is sure to please. 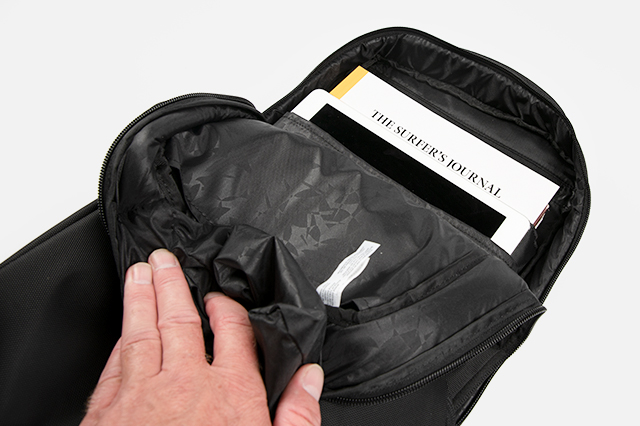 As mentioned throughout this article, the Incase ICON was made with technology in mind. And while that might seem like it narrows down who can and should carry this as an EDC backpack, we think it’s a much broader category than it might seem at first glance. Yes, this bag was definitely designed with tech-hauling in mind, but so many of us work at tech-focused jobs nowadays. Whether you’re a writer, accountant, coder, gamer, designer, engineer, etcetera, you’re probably going to need a backpack that can safely carry your computer, tablet, and all the applicable accessories. In that case, this bag was made for you. The only class of person who might not find this to be a suitable EDC backpack might be people that work doing hard manual labor — in which case a backpack might already be out of the question save for transporting your lunch to and from the job site. 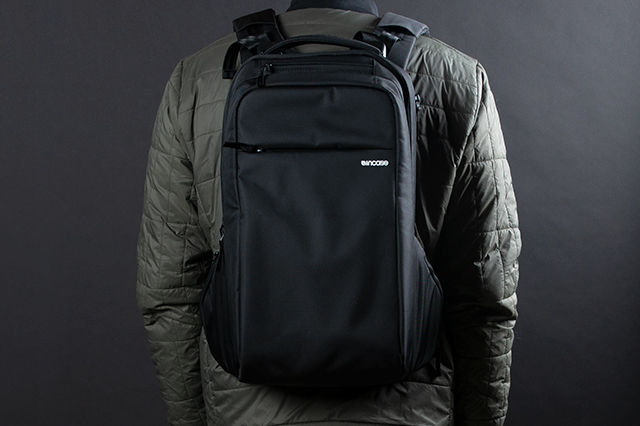 With its issues regarding its overall packability and usable capacity, as well as a back panel that’s prone to dents and creases, the Incase ICON is not without its issues. However, its durable and weatherproof nylon exterior, extensive tech-friendly internal organization, protective padding, and a clean minimalist exterior design certainly go a long way toward making up for its shortcomings. Pair that with a very approachable price point when compared to its overall quality and you may find that the Incase ICON is a formidable option for tech-focused EDC enthusiasts.

A durable, structured, well-designed pack made to meet all your EDC tech needs.