If you take a look back at the progression of the wallet, you might realize something that’s common amongst other types of everyday carry gear and even technology: over time, the designs keep getting smaller and more compact. In fact, the way we carry wallets today is vastly different from just the last hundred years or so. At one time, men wore large, cumbersome wallets on the outside of their clothing — like statement pieces about their success and wealth. Now, they need to fit comfortably and discreetly in increasingly-tight pockets.

Back in 2013, most wallets still fell into the traditional shapes, sizes, and silhouettes of trifolds and bifolds. Then, a father-son team consisting of Daniel and Paul Kane launched a Kickstarter project they called The Ridge — which took a radical approach to storing cash and cards that was mostly unheard of at the time. Their design was a near-immediate hit and remains one of the most impactful wallet designs of the last decade or more. We’ve had the good fortune to get our hands on a pair of their wallets for the following in-depth review. 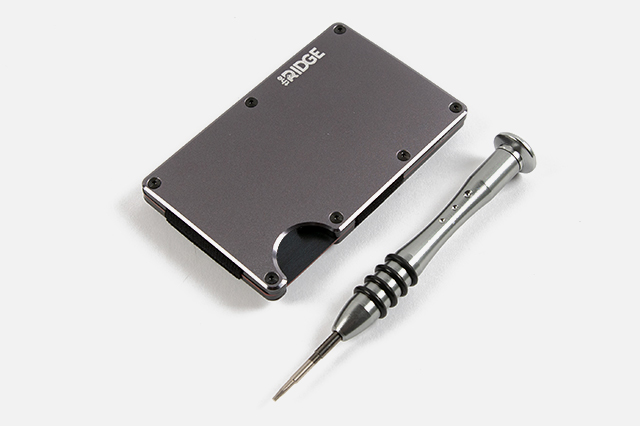 The most striking and immediate thing you notice upon picking up The Ridge Aluminum Wallet for the very first time is just how utterly compact it is. Truly, the silhouette is almost exactly the same dimensions as the cards you would store inside of it. Better still and thanks to the primarily-aluminum construction, it’s also remarkably lightweight. Furthermore, the exposed hardware, money clip or cash strap (depending on your choice at purchase), and the beveled edges give the impression of both minimalist and industrial design influences that work together seamlessly to make The Ridge stand out amongst even its most pared-down competition. 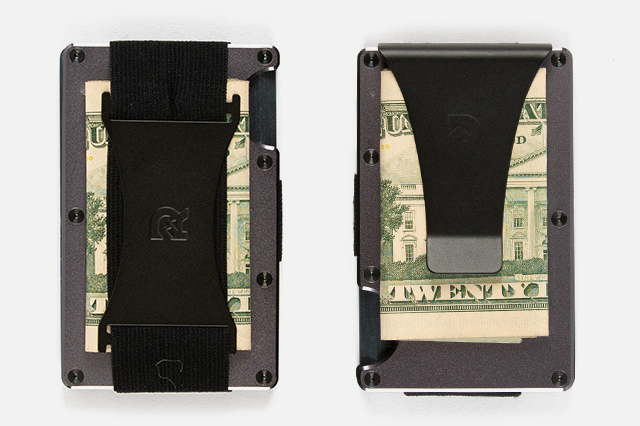 This particular version of The Ridge Wallet is constructed primarily from anodized 6061-T6 aluminum, which is tremendously sturdy, can be made in a multitude of colors (great for customization), and is also extremely lightweight. However, that’s only a part of what makes up this wallet. Along with the primary dual aluminum plates — which are naturally RFID blocking, for a bit of protection and soundness of mind — it also has an integrated elastic band to hold the two plates together, dual interior lining pads that are gentle on any cards you put inside the wallet, seven Torx screws that hold the whole thing together, and your choice of either an elastic cash strap with an aluminum guard or an aluminum money clip.

The construction feels sound and sturdy and also looks remarkably professional. There are no stray fibers, no rough edges, the branding on the upper-edge is clean, and nothing seems out of place. This speaks to the care and refinement put into the design, but also to the craftsmanship of the brand’s factory. It is very clear that this wallet was put through its paces in the design and construction phases, and that makes for a truly exceptional end-user product that — at least regarding its appearance and materials — wants for nothing.

It’s worth noting that this device was meant to be maintained and potentially altered. As such, each purchase also includes a branded Torx driver that allows for easy disassembly, whether that be for routine maintenance (like cleaning it periodically); to replace any broken or lost screws (additional screws are included in the package); or to swap in a new clip, cash strap, or replacement elastic. The inclusion of hardware is simple and, to some, probably seems unnecessary. But it’s also handy and speaks to how well-considered this EDC wallet truly is. 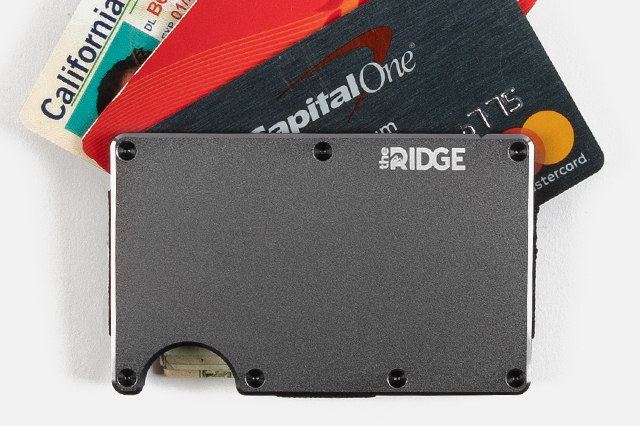 As is the case with so many more modern cash and card carriers, The Ridge hinges on two seemingly-opposing ideals: maximizing carry capacity while minimizing any and all excess (e.g. paring down the silhouette and reducing materials used to the bare necessities). However, when compared to other similar options, The Ridge may do it better than all the rest. You see, while it has a silhouette that’s roughly the same size as a credit card, it can hold a whopping 12 cards at a time without stretching out (according to the brand). We didn’t push it to that limit, but we did discover that sliding a reasonable number (five, in our case) of credit and ID cards into it was a very simple and seamless process. They all slid in nicely, none stuck out awkwardly, and they all feel quite secure.

Extracting those cards, however, proved to be somewhat more difficult. Opposite the card slot, there’s a small thumb-sized cutout that’s intended to allow you to push the contents of the wallet beyond its edge for easy extraction. The problem we had is that this was difficult to manage one-handed. You see, the better your grip on the wallet, the more you squeeze the plates together, which makes pushing your cards out rather difficult. We found the best way to remove the cards was by gently holding the wallet with one hand, pushing the cards out via the cutout with the other hand, and then swapping grips to grab the cards. To be fair, this is not particularly difficult, but it does seem somewhat inconvenient when the wallet shines so brightly in other areas.

Furthermore, the wallet comes with a conundrum: you can it with either a money clip or a cash strap. The aluminum money clip is more secure but causes the wallet to bulge slightly while in your pocket (this is unsightly facing outward and uncomfortable facing inward). The cash strap also has an attached guard that makes it slightly more secure than earlier editions, but it does compromise the overall thinness of the wallet (although this is very slight), but you can remove it if you don’t want or like it. The good news is: if you’re not happy with your choice, making the swap to the alternative option is as simple as purchasing the accessory and making the swap with the included Torx driver, which is a very handy customization option. 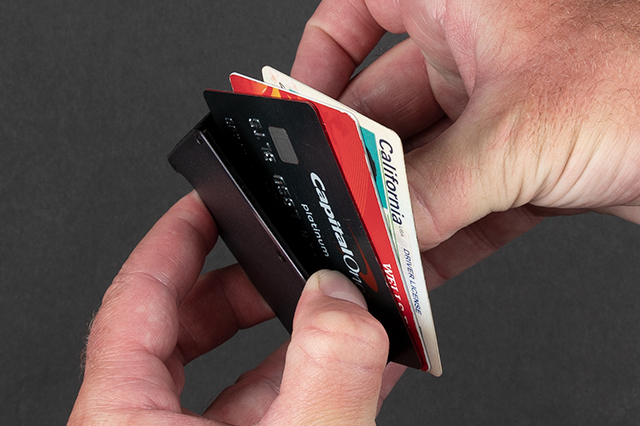 The modern EDC enthusiast that values clever innovation, unique use of materials, relatively minimalistic gear footprints, and a bevy of styling options (both functionally- and aesthetically-speaking) seems to be the person that would appreciate this modern wallet most. However, if you’re a traditionalist with a taste for heritage materials like leather or you appreciate the concept of heirloom EDC gear — for instance, an embossed bifold wallet you might pass down for generations — then this perhaps is not the right choice for you. While The Ridge wallet certainly looks spectacular in its modernity, it’s definitely built with function in mind first. 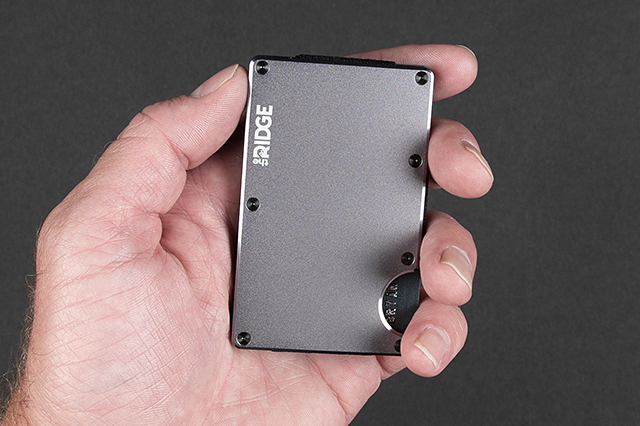 The Ridge Wallet has a sterling reputation with very good reason. It isn’t without issues — namely that it lacks comprehensive organizational options, it can be a bit rigid and uncomfortable in your pocket (especially when fully-loaded and equipped with a money clip), and that extracting your cards is a bit tricky the first few times — but it also more than makes up for those issues. It’s handsome, beautifully-constructed and -designed, customizable, easy to maintain and alter to suit your needs and preferences, and slots in brilliantly with other modern everyday carry gear. Despite the fact that this wallet first came out in 2013, it’s still one of the top options and ranks amongst the best EDC wallets of all time.